Cyber-attacks on an American city 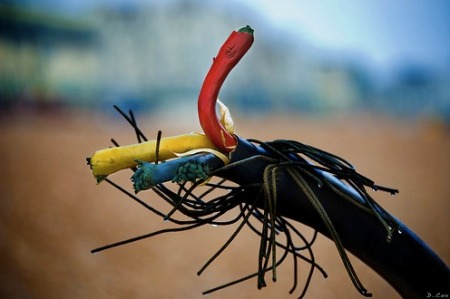 Slashdot reports on a mysterious case of high tech urban sabotage in California, with lessons for first responders in complex urban environments.

Just after midnight on Thursday, April 9, unidentified attackers climbed down four manholes serving the Northern California city of Morgan Hill and cut eight fiber cables in what appears to have been an organized attack on the electronic infrastructure of an American city. Its implications, though startling, have gone almost un-reported.

“That attack demonstrated a severe fault in American infrastructure: its centralization. The city of Morgan Hill and parts of three counties lost 911 service, cellular mobile telephone communications, land-line telephone, DSL internet and private networks, central station fire and burglar alarms, ATMs, credit card terminals, and monitoring of critical utilities. In addition, resources that should not have failed, like the local hospital’s internal computer network, proved to be dependent on external resources, leaving the hospital with a “paper system” for the day”

This is an interesting example of emerging threats to urban centres in the future, along the lines of previous posts on attacking the electric grid system.   The entire article, found here, is well worth reading.

In particular, Bruce has a discussion of the lessons learned from this mysterious attack:

The first lesson is what stayed up: stand-alone radio systems and not much else. Cell phones failed. Cellular towers can not, in general, connect phone calls on their own, even if both phones are near the same tower. They communicate with a central switching computer to operate, and when that system doesn’t respond, they’re useless. But police and fire authorities still had internal communications via two-way radio.

Very rich food for thought about the future of complex urban emergencies.

The Guardian’s James Randerson suggests that “climate scientists have actually been toning down their message lest the worst-case scenario becomes a self-fulfilling prophecy.”

A recent Guardian poll of climate scientists found that;

Just 7% of the 261 experts surveyed (200 of whom were researchers in climate science or related fields) said they thought governments would succeed in restricting global warming to 2C. Nearly two-fifths thought this target was impossible and 46% thought a 3 to 4C rise by the end of the century was most likely.

He then echoes a common refrain floating around these kinds of discussions; “Don’t give up, it’s not hopeless, otherwise this will be a self-fulfilling prophecy!”

I humbly suggest that we stop using the term “self-fulfilling prophecy” in connection with any kind of climate change action.

As an emergent effect, it is in some real way the sum of all our individual actions. Of course what we believe in now influences our actions.  And this, by implication, influences the course of the future.  So belief is an important part of the climate risk communication srtategy.

But it is silly to think that acknowledging how bad it is and how bad it might get will cause some sort of society-wide suicide impulse.  No one is going to lie down in the face of their own destruction.  The louder and more severe we communicate the reality of the situation, the more likely we are to realise what kind of a situation we are in and, hopefully, start to motivate the change it before hand.

The “self-fulfilling prophecy” notion distracts from the real political issues of risk communication and strategy formation in the face of dangerous climate change. 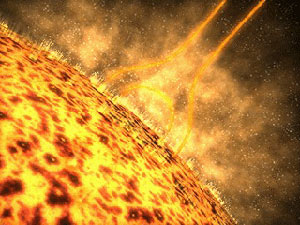 The New Scientist reports on a recent NASA study evaluating the risk of solar plasma flares.

Not your average humanitarian issue but interesting none the less:

It is midnight on 22 September 2012 and the skies above Manhattan are filled with a flickering curtain of colourful light. Few New Yorkers have seen the aurora this far south but their fascination is short-lived. Within a few seconds, electric bulbs dim and flicker, then become unusually bright for a fleeting moment. Then all the lights in the state go out. Within 90 seconds, the entire eastern half of the US is without power.

A year later and millions of Americans are dead and the nation’s infrastructure lies in tatters. The World Bank declares America a developing nation. Europe, Scandinavia, China and Japan are also struggling to recover from the same fateful event – a violent storm, 150 million kilometres away on the surface of the sun.

It sounds ridiculous. Surely the sun couldn’t create so profound a disaster on Earth. Yet an extraordinary report funded by NASA and issued by the US National Academy of Sciences (NAS) in January this year claims it could do just that.

Taleb on “exponential complexity”, “hidden risks” and their consequences

Taleb is talking about finance, but the same kinds of drivers are at work in the humanitarian system. The consequence?

In this clip from the Charlie Rose Show, “Black Swan” author Nassim Nicholas Taleb explains how our lack of awareness of exponential complexity hid the hidden risks within our financial system, leading to unexpected collapse.

We had an accumulation of hidden risks in the system, coupled with an increase in complexity. Never in the history of the world have we had a situation with so much complexity, coupled with so much ignorance… The world is much more complex and interconnected than we know, and the people who are supposed to know, don’t know.