Water rationing in Yemen; a sign of things to come? 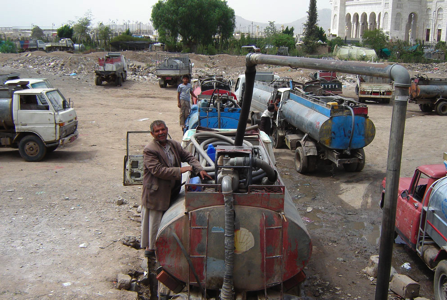 Drivers wait at Al-Suhaini Well, near Al-Saleh Mosque in the Yemeni capital Sanaa, for three to fours hours to have their trucks filled with water. © Adel Yahya/IRIN

“Water and sanitation companies in Yemen are adopting unprecedented water rationing in major cities”, reports IRIN in a recent article.

The impact on local residents has been huge.  One resident reports,

Our household has received no water for 21 days, so I turned to buying water from trucks… In the past month, I bought water four times, costing me YR10,000 [$50] – nearly one-third of my monthly salary.

Is this a sign of things to come in other parts of the arid world?

Gwynne Dyer’s book, “Climate Wars“, came out in 2008, and was a sobering investigation into the security implications of climate change.

The book was recently serialised into a three part special on the Canadian Broadcast Company show, “Ideas“.

It won’t be anything surprising or new to the weather beaten, war torn readers of our hirsute blog, but it is a nice bringing together of ideas in a very presentable fashion that may help make the case for lay listeners.

About 2 years ago I noticed that the military in various countries, and especially in the Pentagon, were beginning to take climate change seriously. Now, it’s the business of the military to find new security threats. It’s also in their own self-interest, since they need a constant supply of threats in order to justify their demands on the taxpayers’ money, so you should always take the new threats that the soldiers discover with a grain of salt. You know, never ask the barber whether you need a haircut.

But I did start to look into this idea that global warming could lead to wars. It turned into a year-long trek talking to scientists, soldiers and politicians in a dozen different countries. I have come back from that trip seriously worried, and there are four things I learned that I think you ought to know.

The first is that a lot of the scientists who study climate change are in a state of suppressed panic these days. Things seem to be moving much faster than their models predicted.

The second thing is that the military strategists are right. Global warming is going to cause wars, because some countries will suffer a lot more than others. That will make dealing with the global problem of climate change a lot harder.

The third is that we are probably not going to meet the deadlines. The world’s countries will probably not cut their greenhouse gas emissions enough, in time, to keep the warming from going past 2 degrees celsius. That is very serious.

And the fourth thing is that it may be possible to cheat on the deadlines. I think we will need a way to cheat, at least for a while, in order to avoid a global disaster.

Here is a link to the full show, with embedded audio.

Water shortages rising across globe, but especially in India 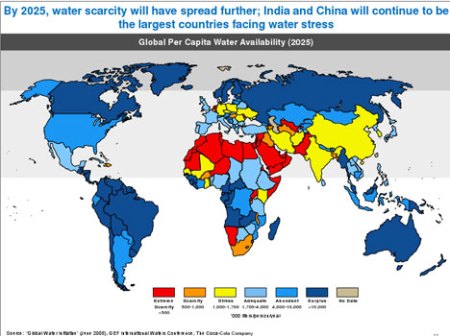 Jaymi Heimbuch reports on a recent report from Grail Research on water shortages across the globe.

From her summary at TreeHugger:

Key findings from the study include:

By 2025, India, China and select countries in Europe and Africa will face water scarcityif adequate and sustainable water management initiatives are not implemented, and an estimated 3 Billion people will be living below the water stress threshold.

Although low and middle income developing countries currently have low per capita water consumption, rapid growth in population and inefficient use of water across sectors is expected to lead to a water shortage in the future. Developed countries will need to focus on reducing consumption through better management and practices.

By 2050, per capita water availability in India is expected to drop by about 44% due to growing populations and higher demand, as well as higher pollution levels.

The report takes a fascinating look at how water demands are changing, the policies currently in place, projected policies, and the future of fresh water across the planet, but with a very specific look at India. The numbers, while frightening, also show where change is possible and disaster avoidable…if the warning signs are heeded.

Paul Currion on the “crisis” of crowdsourcing in a crisis

Instead of incestuously summarising here, I refer readers to Patrick’s original posts:

And then to Paul’s critique here:

As well as an HFP blog related plug here:

We hope Patrick replies. Updates to follow as they emerge.

In a statement which has already gotten much press elsewhere, the UK’s chief scientist Prof. John Beddington suggests we face a “perfect storm”of crisis drivers by 2030.

“We head into a perfect storm in 2030, because all of these things are operating on the same time frame,” Beddington told the Guardian.

“If we don’t address this, we can expect major destabilisation, an increase in rioting and potentially significant problems with international migration, as people move out to avoid food and water shortages,” he added.

It is music to our ears to hear such well placed politicians and scientists reflecting the realities of tomorrow’s complex, interlinked and massively vulnerable world.

New York University Professor Mitchell Moss suggests in the Journal of Homeland Security and Emergency Management, that US Federal disaster relief legislation is dangerously out of date and must be reformed to provide for rapid relief after a catastrophe.

The paper argues that the main US Federal Disaster laws, in the form of the Stafford Act, is too cumbersome to be of use for today’s complex crises.  The report’s author argues that the laws:

It goes on to suggest that US lawmakers should,

The press release can be found here and the full paper here.

UPDATE – There is a second paper of interest which supports the findings of our previous past (permalink), from same journal issue.  The paper, entitled, “Enhancing Organizational Resilience Through Emergency Planning: Learnings from Cross-Sectoral Lessons” (full text PDF), compares “lessons learned” from post-disaster learning exercises for a series of major disasters in the UK and has interesting implications for Somers’ work above.

The authors found that common themes among post-disaster feedback exercises were:

Of these, we find the first two the most interesting and important, vis-a-vis the work of the Humanitarian Futures Programme.  The need to communicate and interact better with non-traditional actors, including the media, general public, and academia is also particularly important.